Our speaker for July was club member and past-Chairman Neville Lyons.

His illustrated talk entitled ‘British War Artists of the Second World War’ was in complete contrast to his two previous presentations to the Club – the ‘Joe Lyons Corner Houses’ saga and the story of ‘Leo the First Business Computer’.

Many of his audience this time were surprised to learn about such a large output of work from some very well-known artists, (such as Eric Ravilious, Laura Knight, Terence Cuneo and Stanley Spencer), and some less well- known.

Neville explained the establishment of the War Artists Advisory Committee, under Sir Kenneth Clark, and its work in organising the activities of the many artists, who recorded the war on the Home Front and Overseas, on land, sea and in the air.  All of this was accompanied by wonderful images capturing the relevant mood projected by each piece of artwork.

Club member, Ian Mackrell, gave a well-deserved vote of thanks to Neville for his carefully researched presentation and confessed that, like many present, he was unaware of the sheer size and scope of this very interesting subject. 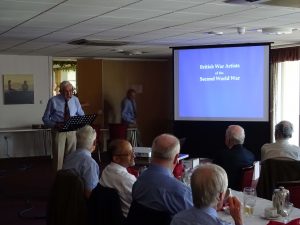